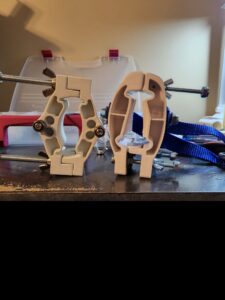 SO, how do these two products compare?

First, let’s talk about the design of each. I am going to give an honest recount of some history. I have been selling my Malehanger online since 2012. Fast forward to a few years ago. Someone who turns out to be Mike of Total Man (he hadn’t started his site yet) sends me a private message on a semi well known forum. He’s friendly enough and complements my site and says he is launching a YouTube channel that will be focused on mens sexual health and enhancement. He says he wants to review my product on his channel and of course, I take him up on his offer. Who doesn’t mind a bit of promotion?

Several months later, his YouTube channel has grown exponentially and he has also started his own men’s sexual health and penis enlargement related site. Guess what? He has a compression penis weight hanger that looks similar on the inside of the device to my older model of my Malehanger. I just happened to have been in the process of updating my Malehanger design to improve the grip of it, as the older design was more rounded inside and it would often “slip” during use. I’m not a superstitious type of guy, but I do believe karma can happen. Several months later, I start getting the occasional emails, or messages on my Malehanger reddit from owners of the Total Man hanger saying things like “this hanger slips during use, does yours work better?”

Yep, karma’s a bitch. To this day, I continue to see people come from the Total Man hanger to my Malehanger and more often than not, they prefer Malehanger.

SO, the differences between the two compression penis weight hangers are:

As with most of his product line, parts are made in China. That can mean a lot to a lot of different people. I’ll leave the “political stuff” out.

Has a fixed, non flexible steel cable on the front for attaching weights. This cable can get in the way of your hands when adjusting this device.

The inside of the Total Man hanger is more rounded as mentioned above. This more rounded shape is not conducive to a good grip on the penis. You can find users mentioning the slippage issue caused by this with an internet search for “total man hanger slippage”.

As I have seen posted various places online, the Total Man device does come with some basic beginner information. However, there doesn’t appear to be direct product support to help users with other issues when using the device.

Has a soft, flexible, but very strong braided nylon strap and hook for attaching to weights.

Opens and closes on a hinge on the bottom of the device. This makes Malehanger easier to manipulate and adjust.

Malehanger comes with access to a detailed how to guide which includes step by step pictures as well as videos to help you understand how to use it. There is also email support as well as a live support chat where the owner of the Malehanger brand is active several times a day helping customers learn to use Malehanger.

I hope this post has helped some of you out there.